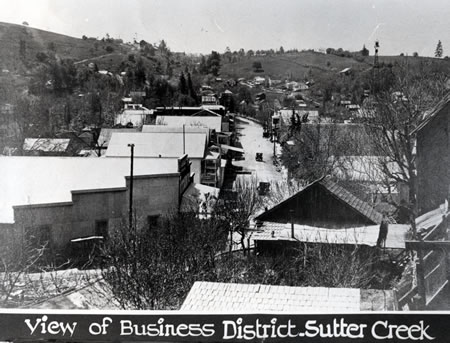 The town takes its name from the creek, and the creek takes its name from John A. Sutter. Mr. Sutter owned the saw mill in Coloma where the first “Mother Lode” gold was found in January of 1848. Unable to stop the tide of gold-seekers flowing over and destroying his lands, Sutter decided to follow the call of gold, trying in vain to recoup what the Gold Rush had taken from him. He arrived where Sutter Creek is currently located in 1848 with a band of Kanakas and Indians, and upon finding a likely spot, began mining along the creek.

A small settlement began to grow, centered around a cloth tent where the miners met on rainy Sundays when they couldn’t go to Drytown or Jackson. The place eventually took the name of its most prominent citizen, and was called Sutter’s Creek, Sutter, Sutterville, and finally, plain old Sutter Creek. But Sutter wasn’t a miner, and many of the other miners in the area didn’t much approve of his using servants to dig for gold. He left the area a short while later, returning with his men to Sutter’s Fort in Sacramento. He never mined again. 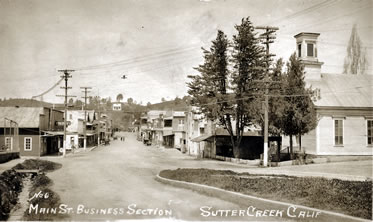 Sutter Creek achieved prominence as the supply center for all the mines that circled the town. It was hard rock mining more than placer mining that helped the town to boom.historic view of sutter creek Mines owned by Alvinza Hayward (the Gold Country’s first millionaire), Hetty Green (at one time the country’s richest woman), and Leland Stanford (at one time California’s governor and the founder of Stanford University) included the Union Mine (later renamed the Lincoln Mine) and the Old Eureka Mine. Sutter Creek remained a full- fledged mining town, boasting some of the best producing deep rock mines in the Mother Lode. Today, the town’s locals “mine” the visitors who come from around the world, drawn by both history and small town hospitality.

Notable historic landmarks include Knight Foundry and the nearby Kennedy Mine. Visitors should take some time to enjoy the historic wine country surrounding Sutter Creek. Wine production in the area dates back one hundred fifty years, when pioneers seeking their fortunes in gold found the ideal climate for growing wine grapes. Today Amador County boasts 35 wineries and is famous for its red Zinfandels.

Most historians agree that Sutter Creek was named for John A. Sutter, the owner of the sawmill in Coloma where gold was discovered. Sutter first came to the region in 1846, and was the first European to try his luck mining in the area in 1848. There was little activity in the former mining camp until quartz lodes were discovered in 1851. 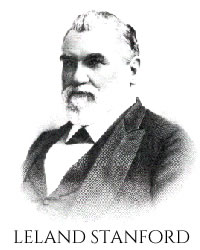 Leland Stanford, founder of Stanford University, was both a one-time resident of Sutter Creek and an investor in the mining operations. Stanford had been paid with an interest in the Union Mine to settle a debt at his grocery in Sacramento, but upon seeing the losses accumulate was determined to sell the mine (renamed the Lincoln by then) for $5,000. 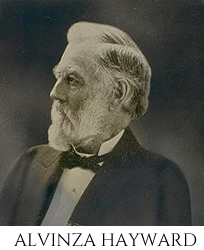 The town began to boom when Alvinza Hayward was daring enough to risk the capital it took for hardrock mining. Sutter Creek achieved its permanency as the supply center for the mines that ringed the town. 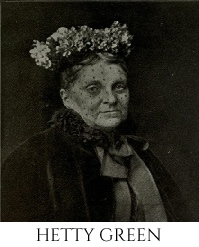 At the foot of the sweeping curve of Highway 49 just south of town stood the Old Eureka Mine, once owned by Hetty Green. By the late 1850’s, Leland Stanford, later the governor of California and the founder of Stanford University, picked up a stake in the Union Mine (later renamed the Lincoln Mine) to the north of town.

Sutter Creek is a General Law City, which means it is organized in accordance with provisions of the State Government Code.